An Interview with Liberty Mutual on The Responsibility Project 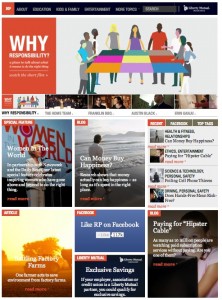 Responsibility is a core value at Liberty Mutual Insurance — one that the company expressed in a 2006 TV commercial that highlighted the concept of paying it forward.

That commercial generated an “overwhelmingly positive response from consumers,” says Sharifah Niles-Lane, the company’s social media strategy manager, global brand management. “They wrote letters, they emailed, they called — just to say how inspired they were by this TV commercial.”

So Liberty Mutual sat down with its advertising agency, Hill Holliday, which produced the spot and looked into how they could build on its success.

“We’re an insurance company and it’s really hard to make that human connection with a consumer who’s not in the market to buy insurance, which is a majority of the time,” says Niles-Lane. “So we just felt that there had to be something to help us communicate on a human level and in an engaging way with the general consumer.”

“We also did research on how the spot and the overall responsibility brand positioning made employees feel and the result of that was The Responsibility Project, which was born in 2008.

Here’s what she had to say:

The Responsibility Project is a place where people can have a conversation around around doing the right thing, with Liberty Mutual almost acting as a [moderator].

We’re really allowing the average consumer to have an open discussion in a respectful way around everyday responsibility themes that affect their lives — things that are relevant in the news, things that relate to parenting or schooling or any topic, you name it.

The Responsibility Project started with a series of short films.  As consumer behavior has changed over the years, The Responsibility Project evolved with it.  It was our first foray into social media and included a couple pieces of content that we put out every week. Today it’s a well-oiled machine of short-form blog posts, long-form articles, Q&As, short films and polls.

The Responsibility Project has opened the doors to partnerships that align, such as the Oprah’s No Phone Zone Pledge and  Women in the World Summit, which is a Newsweek and Daily Beast summit that’s been going on for five years.

We’ve also been built great content partnerships over the years with publications such as The Huffington Post, Slate and TED. Since 2008 the site has had over 35 million unique visitors.

We like to say that it’s our market differentiator, but it’s also really a true reflection of our brand.

Responsibility is part of everyday life at Liberty Mutual.

If you look at even our internal corporate Facebook page today, you’ll see that it’s all around community service and this global effort that Liberty Mutual is doing for the second year in a row where we have tens of thousands of employees  taking time out of the workday to volunteer and give back to the community.

In terms of broader impact, it definitely influences some of our larger sponsorships like the U.S. Olympic and Paralympic teams.

Over the years, employees have asked “How can we get involved with The Responsibility Project?” and obviously we want to make sure we do that in a seamless way that doesn’t seem too forced.

This year we’re adding an action layer to the Responsibility Project, so we’re moving from “say” to “do.”

We know that over the years we’ve had over 35 million unique visitors, but there’s no way for us to truly understand how The Responsibility Project has impacted their lives other than through their commenting.

This will extend into the website, to mobile and hopefully go viral. There will be an internal activation piece of this, so that we can integrate employees into the action layer of The Responsibility Project.

It’s interesting for us to understand — especially in the U.S. — how society feels about responsibility and responsibility is ever evolving as it relates to current events.

This year we launched a study called The Responsibility Index, and what that does is explores exactly how the U.S. population views themselves — in terms of how responsible they feel they are — and what does responsibility actually mean. Our research has found that people equate doing the right thing with responsibility, but again it gets a little complicated because that means something different to everyone.

Responsibility is Good for Business