My Heart Is in Cleveland Today 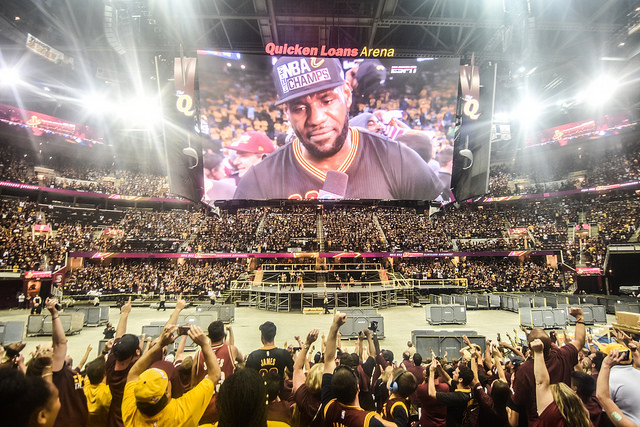 I needed help on Sunday morning. I could handle the route every other day of the week but on Sunday the load was too large.

Mom would wake up early with me and lend a hand. She would drive my route delivering the Akron Beacon Journal. It was my first full-time job and I don’t think I’d even celebrated my tenth birthday.

While the paper said Akron, it just as easily could have been the Cleveland Plain Dealer. We subscribed to both papers. Growing up in  Northeastern Ohio, we considered ourselves from both Cleveland and Akron. Before Mom and I would head out the door, I’d set one paper on our kitchen table. I’d reach in and pull out the sports page, give it a quick once-over and set it on top. In my house that was the section that mattered most.

We didn’t go to church on Sunday. Sports became our religion. Some of the earliest memories I have as a kid are watching my dad play slow pitch softball in Cleveland. I also remember my first Browns vs. Steelers game. I was in first grade. The Browns lost. In our house, however, one game stood above all the others: basketball.

Growing up, the Cavs played at the old Richfield Coliseum about 20 minutes from our house. Owned by the legendary Ted Stepien, the game was often overshadowed by the experience, which was great as a kid. We’d beg for a Cavs wristband from “Superfan” Boot and hope to get on the court for a timeout game of dribble tag with Crazy George. My relationship with Cavs basketball dates back to my earliest memories of childhood. It’s where I fell in love with the game and team that would have such an influence on my life.

When I was in high school, the Cavs had really good teams. The team was sold to businessman Gordon Gund in 1983 and they were on the verge of a championship run until Air Jordan hit “the shot” that broke the heart of every single Cavs fan.

My brother Chad and I went on to attend Ohio University together. I was a junior when he showed up on campus. He tried out for the varsity basketball team and got cut so we wound up playing together on our fraternity squad. That year was the most fun I’ve ever had playing sports. We won the fraternity championship and I promise you the party we had that night put the Cavs Las Vegas celebration to shame.

We lost my brother the next year when he tried out for the varsity squad again and made the team. By his senior year he was the starting guard and captain of the team. The most fun I have ever experienced as a sports fan was watching his squad win the 1993 MAC Tournament Championship and gain a berth in the NCAA tournament that is March Madness. The party with the team on Court Street that night won’t ever be forgotten. “Stand Up and Cheer!”

I was in Cincinnati working for Nationwide Advertising Service at the time. Ironically, it was a company Ted Stepien started and Gordon Gund acquired as part of his purchase of the Cavs franchise. My connection to Cleveland basketball was still very strong. In an incredible twist of fate, my brother would eventually take his career back to Cleveland working for, you guessed it, the Cavs.

In 2003, he we was the vice president of sales when the stars aligned and the Cavs were awarded the first pick in the NBA draft. Of course they selected Lebron James. My brother’s life changed that night. The best way to describe it is that ticket sales were no longer a problem but it was so much bigger than that. This kid from Akron, one of our own, held the promise of greatness and it was going to be on display for our team in our city.

He was brilliant from the start and the Cavs, playing in Gund Arena in downtown Cleveland, were the toast of the town. Cavs basketball was a big part of our family life again and it was so much fun! I made every home playoff game during their epic title run and celebrated their take-down of the Detroit Pistons in the Eastern Conference finals with Chad and his wife Tracey until sunrise. We saw championship banners in our future!

My brother left Cleveland. It was not an easy decision but I understood. After all, I left Cleveland a long time ago. My brother was being recruited to run sales for the Dallas Cowboys in support of their new stadium project. It was the best brand in sports and the opportunity of a lifetime. He moved to Dallas and his career has evolved to an entirely new level. Eventually I left the ad agency to embrace the opportunity around starting my own business. Those decisions are part of life.

Of course, Lebron would eventually leave Cleveland also and break the hearts of fans in  Northeastern Ohio. Cleveland had felt sports heartache for too long, having a near 50-year drought without a champion. Lebron represented hope in Northeastern Ohio and he was one of us. I didn’t love the way he left (announcing his decision on national television) but I never blamed him for going to Miami. It was his career and his call. A lot of local kids take their talent elsewhere to experience life outside of the city they grew up in. It was a basketball decision and a very personal decision. He won two NBA titles in Miami. However, his work wasn’t finished. There was something perhaps a little hollow about those titles. He didn’t win them at home.

All was forgiven in Ohio when Lebron announced he was coming home. He came home because bringing a championship to Cleveland mattered. He knew how much it would mean to the community. He also understood it wouldn’t come easy:

“In Northeast Ohio, nothing is given. Everything is earned. You work for what you have. I’m ready to accept the challenge. I’m coming home.”

Nothing comes easy in Northeast Ohio. I am proud I grew up there and sports united us. Basketball has been one of the best gifts of my life. Wherever I went in the world, all I ever needed was a pair of hoop shoes and within a few runs I could make new friends. Some of the closest friendships I have today, including the tight relationship I have with my own brother, were forged through playing that game.

In Northeast Ohio, sports defined us. 52 years without a championship. Now Lebron was coming home to help right so many wrongs. Of course, nothing is a given. In fact there was that curse that Joe Posnanski talked about in his beautiful article Titles and Tears:

There will be times — a hundred times, a thousand times, a million — when you will wonder if maybe this sprawling, ambitious, struggling, messy, bighearted city where you grow up is cursed. Or doomed. In those moments, you’ll shake your fist at the sky, and you’ll think about all the things you love about this place: The corned beef sandwiches at Corky’s and Lenny’s; the exotic sounds and smells of the West Side Market; the hard-hat factory workers like your dad who bowl on the weekends and mow their own lawns and rub your head at Cleveland Municipal Stadium when the Indians score a run.

You’ll think about the bountiful and wonderful Higbee’s department store downtown, the one with the thin escalators, where your mom and dad take you every now and again when they want to show you that you live someplace grand. They will close that Higbee’s down some day, kid. They will close a lot of places down, even Randall Park Mall, the one they call the world’s largest shopping center.

I don’t even want to tell you what happens to your Cleveland Browns. Brace yourself.

You’ll think about the suburbs and sections of town — Parma and Willowick and East Cleveland and Brooklyn and Rocky River and Euclid and all the Heights — and how they’re all little towns, all their own, but they’re Cleveland too. You’ll think about how the baked bread smells in Little Italy and all those old men playing chess over at the Arabica coffee place in Coventry and the chocolate dipped ice cream cone at Cream-o-Freeze that you get after your little league team wins a game.

It will happen, kid. Cleveland’s going to win.

Well, win we did with our hometown kid. In true Cleveland fashion, it wasn’t easy. In fact, the series against the best regular season NBA basketball team in history looked hopeless. No team has ever come back from a 3-1 deficit to win an NBA Championship.

Hell, I didn’t think they could do it. I just wanted them to make it a competitive series. After all, I grew up saying “well, we’ll get ‘em next year.” I was used to my team losing. We never had a champion in Cleveland.

Our Cleveland Cavaliers are the 2016 NBA World Champions.

If you aren’t from there it’s hard to understand how much this means. It also took a minute for it to really sink in when the game ended. Nike captured the emotion beautifully in this tribute spot:

VIDEO: Worth the wait

I was sitting in a hotel room in Washington DC getting ready for #SHRM16, with the tears streaming down my face.

My phone was vibrating. I looked down and it was a text from my brother.

I responded. “All time.”

Nothing else needed to be said because our entire lives were connected to this defining moment.

I am not working today. I am watching the celebration parade in my hometown on NBA TV.

My heart is in Cleveland.