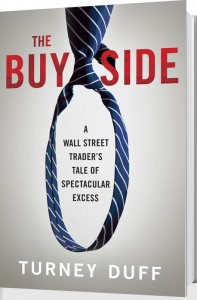 Turney Duff spent 15 successful, addictive, tumultuous years working on Wall Street. After earning millions of dollars and finding himself in rehab twice, he called it quits and turned to his original passion: writing. I have known Turney since college and recently got the chance to catch up with him about his bestselling new book, “The Buy Side.”

Your book chronicles your 15 years on Wall Street, and it’s an incredibly raw and open story about your rise and fall. Give us a little background about how your career got its start.

Turney Duff: There was a lot of luck involved. I was 24 years old and had a degree in journalism. I came to New York City and went to Sports Illustrated’s office, thinking I was going to pop my head in and drop off my resume and shake some hands. There I am, in Midtown, just trying to knock on Sports Illustrated’s door, and they looked at me like I was insane. So after a couple of weeks of not even being able to get a nibble, my uncle helped me get some interviews — on Wall Street. I was petrified going in. I thought I had to be a numbers guy, and I thought I was in way over my head.

The first interview was at Lehman Brothers, and I was shocked by the energy. It blew me away, and I wanted in. I was also shocked because they never asked me one question to determine if I was appropriate for a job in finance — it was like it didn’t even matter. My last interview was at Morgan Stanley. The woman interviewing me said she hadn’t seen the last night’s episode of Melrose Place, and conveniently, I had, and I just reeled off a 30-second synopsis of what happened. She was all smiles after that. 24 hours later, I had a job.

The first couple of years were touch and go. I didn’t know if I was going to be fired. I knew I didn’t belong, and I was out of place.

It seems like the turning point was when you figured out another way to get ahead — socially, after work. Tell me more about that awakening and what that new opportunities that created.

Looking back now, it’s easy for me to see — it’s all about IQ vs. EQ. I probably have an average IQ, but my EQ is much higher. I just knew how to deal with people. During the day I felt out of my element, but then at the end of the day at Happy Hour with a drink in my hand, I was back in my element. I was friends with the bartender, I was friends with strangers. The majority of my co-workers weren’t as natural as I was in social situations and so I started to shine. All of a sudden, I was hanging out with a faster, more successful crowd, and people wanted to help me, to give me their first call, help me make money, or call me about a job.

As your career evolved, you were in a pretty influential position, and that led you down a dangerous path.

I was 32 years old. Not only was I making a couple million dollars a year, but I was also the person solely responsible for giving out somewhere around $40 million a year in commissions to people on Wall Street.  It was my decision to decide who got that money, and people will do a lot to get that.

People were willing to fly me to the Super Bowl on a private jet, or take me to Sundance, or on helicopters to the Hamptons. It was like the Wild West back in the late 1990s, early 2000s. Nothing was regulated or even questioned, it was just part of the business. Short of meeting a guy on the street who gave you a paper bag full of cash, nothing seemed inappropriate.

I got ahead by being social and fun, and as I continued on that path, I started making choices that were not consistent with the way I was brought up. I kept building, but there was never any real foundation to the success. The ironic thing is, as my drug habit increased, so did my success for a while. And it worked … until it didn’t.

As I read the book, it seemed very telling that, even after two stints in rehab, you still had the opportunity to walk right back into the same lifestyle on Wall Street. How did you get out of that cycle?

This might sound strange, but I had the benefit of going to rehab twice. I made the mistake of going back to Wall Street once. I probably needed to make that mistake, but I knew in my heart that it wasn’t fulfilling for me.

I was at a bottom — I was empty. So, I finally trusted my instincts and tried to do what was right.

Now I can look back and realize that I spent 15 years of my life on Wall Street, trying to fill this hole of discontent, and I did it with money and sex and power and drugs and alcohol, and I was never able to fill the hole. Once I started writing, and really made an effort toward sobriety, all of a sudden I felt content and whole again. This book has been a sort of new beginning — a rebirth — for me.

If you were giving advice to a young person, someone like you who’s 22 or 23 and wants to work on Wall Street, what would you tell them?

I have two pieces of advice:

What’s next for you?

Today, my priorities are staying sober and being a great dad. I also get to write everyday and I have never been happier.

Learn more about Turney Duff’s story and his new book, The Buy Side, on his website.