What Do Elite Performers Do Differently? 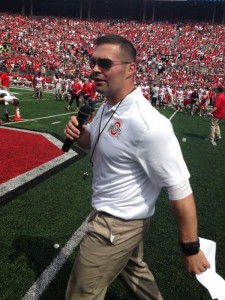 Anthony Schlegel is an elite performer. He’s a former Big-10 and NFL linebacker who transitioned into a role as the head strength and conditioning coach at his alma mater, The Ohio State University (2015 National Champions!). Now, Anthony is applying the fundamentals and mental toughness he learned in sports on his journey as an entrepreneur.

Business leaders can learn a lot from elite athletes. I spent a little time with Anthony recently and he offered some practical insight to help anyone that aspires to achieve the next level of breakthrough performance in their professional pursuits or in life. I think you’ll enjoy the highlights from our conversation.

If You Don’t Have Something to Prove, You’ll Never Improve

Anthony has always approached life with an underdog mentality. He grew up in a blue-collar family, in football-crazed Texas, with a pretty big chip on his shoulder. He wanted to prove himself. “There’s always going to be someone bigger, faster and stronger,” he says. “But I really believe that competition proves excellence. I’ve always wanted to prove that I’m mentally and physically tough.”

In college, after two years on the football team at the Air Force Academy, Anthony was presented with 32 offers from D-1 schools. Instead of taking an easy path where he’d be a guaranteed star, he chose to transfer to Ohio State, a team that already had three great linebackers. He wanted to test himself against the very best and he passed with flying colors. That very big chip on his shoulder continues to shape his effort and attitude on a daily basis. When someone has something to provide, they find a different level of resolve and resilience no matter the circumstances.

Embrace the competition. I learned how to compete through my own sibling rivalry and that experience has proven invaluable. We’re all competing today. If it isn’t for new business, it’s certainly for time, attention, interest, investment, resources, jobs, promotions, share of market and opportunity. The world of work is a very competitive place.

Seek out competition and use it to improve.

Throughout his career as an athlete and coach, Anthony has learned that the best performers – the very few who can call themselves elite – know that the process is what matters.

“The best players love the process. They love working out, putting in time, watching film, and doing all the work that allows them to play at a high level.”

He’s learned that raw skill isn’t always what matters. Attitude and discipline are what make good players great. To take your own performance to the next level in any endeavor requires commitment, sacrifice and the relentless pursuit of improvement. Are you getting better everyday? It’s a question worth considering and often it simply requires some deep focus and investment in the process. The results will show up over time.

To get better, love the process, not just the outcome.

After Anthony left the NFL, he moved back to his hometown in Texas. That transition period prompted a bit of an identity crisis. “My entire life, I’d played football. That was my identity – I was an NFL linebacker. I didn’t know how to maximize myself without that, because my identity was still wrapped up in being a professional athlete.”

I’ve been there. I can relate to this identity struggle during a big life change. When I left my role at the company where I’d worked for more than 15 years, and swapped my office for my kitchen table, I was scared. When we’re used to a steady paycheck, benefits and a clearly defined role, the loss of that security can be terrifying.

Anthony got through his transition by reflecting on his purpose and values: To maximize people through authentic service. He mapped out his values: authenticity, service, excellence and integrity.

By identifying his personal mission statement and his core values, he created a foundation that helped him navigate change and figure out his place in the world beyond being an athlete. Today he is better positioned and prepared to share his unique gifts with the world in a way that serves and extends far beyond the game of football.

This foundation served as his guide to action. Future decisions are weighted with his values and purpose top of mind.

This is a useful exercise for anyone who is navigating change or wants to achieve the next level of breakthrough performance.

When you’re in transition, center yourself by focusing on your core purpose and values.

Decide How You Show Up

After transitioning out of the NFL, Anthony spent time training high school and D-2 football players at his hometown gym. Eventually, Jim Tressel offered him a job as the strength and conditioning coach at OSU. Anthony moved his family (his wife, who was pregnant, and his two small children) from Texas to Ohio. Shortly after the move, Jim Tressel left OSU. “It was a tumultuous time,” Anthony says. “I didn’t know what would happen next, so I just trained the athletes as hard as I could. I worked hard and left it all on the table. And because of that, I was retained by the new coaching staff.”

This is an important lesson, and it’s one of the core themes I share in my speaking to business leaders and sales professionals. There will always be circumstances we can’t control. But you can decide how you show up, and focus on bringing your best moment to moment, day to day. That is a choice we own, regardless of the circumstances.

I’m positive that being intentional with the first hour (or even 15 minutes) of each day can make a big impact on performance. I’ve studied top performers’ morning routines, and I wasn’t surprised to hear that Anthony has a very specific routine for his mornings. He gets up early (he’s in the 5 a.m. club), works out hard, and spends time in quiet devotion and study. He’s in the right frame of mind and ready to compete when he attacks his day.

Remember: You control how you show up.

What Are We Afraid Of?

After coaching the National Championship OSU team in 2015, Anthony saw an opportunity. A coach asked him to create a tool to help players with their hand placement.

He went to work and actually developed a game-changing new fitness product. As he started to consider leaving his full-time job to pursue a new path as an entrepreneur, Anthony had a big realization. “I was sitting on the porch with my wife one day and I said, ‘What are we afraid of?’ Fear stifles a lot of people. I overcame that by going all-in. I accepted the challenge and knew I had something to prove.”

So, Anthony burned the boats — removed Plan B — and committed to becoming an entrepreneur. He decided to confront his fear instead of letting fear hold him back. So many people get stuck at this point, but Anthony is accustomed to acting with confidence in spite of uncertainty. He has been here before.

Burning the boats is a metaphor courtesy of famed explorer Hernando Cortez. He landed on the shores of Vera Cruz, Mexico, in 1519 and wanted his army to conquer the land for Spain. Challenging an aggressive enemy, horrible disease and scarce resources, it was going to take all his soldiers had to emerge victorious. As they marched inland to do battle, Cortez ordered one of his lieutenants back to the beach with a single instruction: burn our boats. No Plan B. No retreat. No surrender. No choice but to win.

Burn the boats. Confront your fear. Ask yourself: What am I afraid of?

I couldn’t talk to Anthony without asking him one big question that was on my mind: Tell me about the tackle. Watch the video that went viral featuring Anthony below:

During a night game at OSU, in front of 110,000 fans, Anthony was standing on the sideline, focused on the current play and what his special teams players needed to do next. All of a sudden a fan came running onto the field, past everyone on the sidelines, disrupting the game.

Anthony reacted. “It was just a natural reaction to the situation. I just responded.”

To me, this moment is about preparation and decisiveness. 150 people standing on that sideline watched this happen in front of them and didn’t make a move. Anthony took action. He stepped up because it was the right thing to do without any hesitation. I also know he would do it again in a heartbeat. To put it simply, it’s in his character to act boldly and do the right thing when it’s required.

Anthony is an elite performer. With focus, discipline, and “a love of the process,” he’s put in the work to succeed in whatever arena he finds himself. His recipe for success is universal and available to anyone who wants to achieve more.