Turning Off the TV 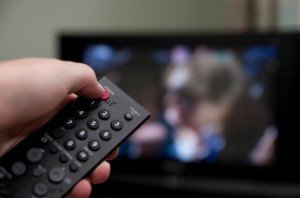 We recently had some serious water damage in the loft, and the repair process has required dismantling the electronics feeding the entertainment system. I was thinking about how to best reconfigure that system when I decided to hit the pause button.  What would happen if I just tried turning off the TV for a few weeks?

Here are the 5 changes I can report so far:

I am a lot more organized.
I am reading more.
I am writing better.
I haven’t missed a workout.
I am having longer, more interesting, more engaging and more meaningful conversations with people I care about.

I think it’s important to share that I wasn’t too big on TV in the first place.  I watch far less than the 34 hours per week the average American consumes. I’ve never actually seen an episode of American Idol, Dancing With The Stars or The Voice. However, I can easily get sucked into SportsCenter, Seinfeld reruns and CNN.  I’ve always considered television a fine way to relax and wind down an evening, but the absence of it has forced me to acknowledge the upside of being a lot more selective about tuning in.

This little experiment probably wouldn’t have happened without the prompt of a good friend who hasn’t owned a television in seven years.  Would you be surprised if I told you he:

Owns and runs a thriving/growing business.
Has traveled the world (50+ countries and counting).
Is in kick-ass shape.
Is one of the most centered people I know.
Is living the life he truly wants to be living.

Coincidence? Direct correlation?  I can’t be sure but I was curious enough to give the “turning off the television”experiment a try.   I can already notice a positive difference.  I’m not ready to abandon television completely, but I will be watching a lot more mindfully.

Most New Year’s Resolutions fail, and I believe the reason is often ineffective time management.  Could turning off the TV give you a way to capture the time and energy you need to make the life improvement you want?   What could you do with an extra 34 hours a week?