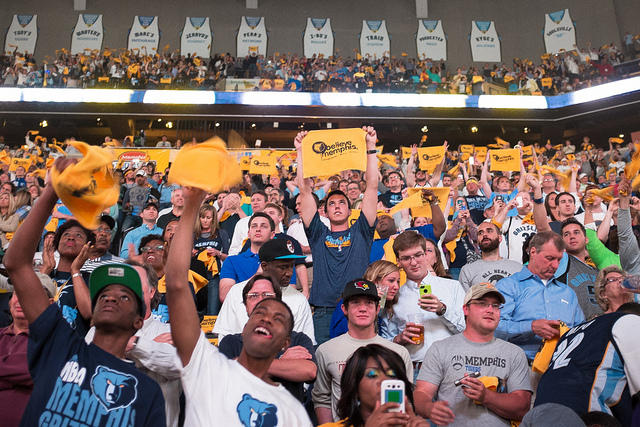 I love NBA basketball! This March I am heading to Grind City to team up with the NBA’s Memphis Grizzlies as part of the team’s new Keynote Speaker Series.

The 3-part series includes an afternoon of professional development followed by a Grizzlies game. The speakers in the lineup include Donald Miller and Lewis Howes. I’m wrapping up the series in March and tickets are still available.

If you’re in the Memphis area, reserve your spot for my keynote on March 6!

While discussing the Grizzlies new initiative with David Ridenhour, head of ticket sales, he explained that, like customers across many industries, NBA fans are looking for an improved experience. In the NBA that often means more access: “They want to go behind the scenes,” he says, “so we’re trying to provide new, cool experiences for our fans, above and beyond attending the game.”

Customer experience is increasingly where business will be won or lost and the Memphis Grizzlies are responding in an effort to turn customers into brand evangelists. Here are a few examples of how the Grizzlies are stepping up to deliver customers more than just a great basketball product.

Giving fans a new level of access to the team

The Grizzlies recently started an in-house media company, Grind City Media, to give fans behind-the-scenes access to what’s going on with the team. They hired Mike Wallace, a beat writer formely at ESPN, reporter Alexis Morgan, and sports radio personality Chris Vernon. “We’re not just covering the Xs and Os. We’re showing the personality of the players, and we’re producing content not just about the Grizzlies, but about Memphis in general,” David says.

“We’ve had a lot of positive response so far. At first a lot of local media was critical, but our fan base has responded very well to it. They like the behind-the-scenes access and getting to know players a little better.”

He points to a recent story Grind City produced, where Alexis Morgan followed Grizzlies player Andrew Harrison while he shopped in Beverly Hills on a road trip. Another big hit: the team filmed new starter Jamychal Green’s reaction to seeing himself on his very first billboard.

“It was cool to see him get a little bit of shine,” David says. “These types of stories show our fan base more about all the guys on the team — not just the big stars.”

It’s important to understand that in order to build better relationships with customers you have to be in both the business of your core product (in this case basketball) and the media/technology business. How are you telling your story? We are in the age of intelligent engagement and data driven storytelling drives sales growth.

Creating experiences beyond the game

The Grizzlies are offering Memphis locals more than basketball. David shared a long list of events and experiences hosted by the team this season: Friday night sleepovers in the arena for Boy Scouts and Cub Scouts, Saturday morning yoga on the arena floor, a partnership with the popular sneaker convention Sneak Fest, a spring 5K, and an agricultural career day highlighting leaders in the farming industry for middle and high school students. A common theme among all the events: Everyone who attends gets a Grizzlies game ticket.

“The strategy is to bring in people who wouldn’t normally come to a game, get them some exposure, initiate that start of fandom, and hopefully it grows from there,” he says.

Finally, the Keynote Speaker Series is designed to provide a valuable new experience for the regional business community.

“We’re looking at the series as a community asset,” he says. “We’re bringing in big speakers that a local Memphis business might not be able to bring in on their own and offering professional development, plus an opportunity to have fun afterwards as an office.” David says the series is key to pitching local business owners and entrepreneurs on using the Grizzlies as a business tool.

As customer expectations change, companies are going to respond aggressively or risk losing business to competition we may not have even considered. I look forward to talking about it with the Memphis business community and Grizzlies fans in Grind City this March!

If you’re in Tennessee, I hope to see you there!